Southeastern Europe is made in cooperation with the Institute for Central-Eastern and Balkan Europe, IECOB.

Need support prior to submitting your manuscript? Make the process of preparing and submitting a manuscript easier with Brill's suite of author services, an online platform that connects academics seeking support for their work with specialized experts who can help. 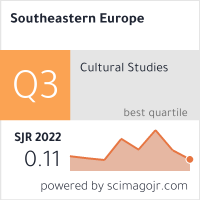 Need support prior to submitting your manuscript? Make the process of preparing and submitting a manuscript easier with Brill's suite of author services, an online platform that connects academics seeking support for their work with specialized experts who can help.
NOW AVAILABLE - Online submission: Articles for publication in Southeastern Europe online through Editorial Manager, please click here.

Editorial Board
Sara Barbieri, IECOB, Bologna
Florian Bieber, University of Graz
Vesna Bojicic-Dzelilovic, London School of Economics and Political Science
Sharyl Cross, St. Edward’s University, Austin TX
Christina Koulouri, Panteion University of Social and Political Sciences, Athens
Joseph Marko, University of Graz
Sergiu Miscoiu, Babes-Bolyai University, Cluj
Julie Mostov, New York University
Asim Mujkić, University of Sarajevo
Craig Nation, U.S. Army War College, Carlisle
Günay Göksu Özdogan, Istanbul
Francesco Privitera, University of Bologna
Sabrina Ramet, The Norwegian University of Science & Technology
Maria Todorova, University of Illinois Urbana-Champaign
Mitja Zagar, Institute for Ethnic Studies, Ljubljana
Anna Krasteva is director of CERMES (Centre for Refugees, Migration and Ethnic Studies) at the New Bulgarian University in Sofia. She is doctor honoris causa of University Lille 3, France. She has edited 21 books and published numerous articles in Bulgaria, USA, France, the UK, Belgium, Russia, Switzerland, Germany, FYROM, Slovakia, Greece, Serbia, Turkey, Italy, the Netherlands, and Romania. She worked as fellow at the Institute for advanced studies in Nantes, France (January-June 2010) and lectured at several universities in Europe. Her main fields of research are post-communist democratization, migration, ethnicity, e-citizenship, digital democracy. She is member of the editorial boards several journals, including Nationalism and Ethnic Politics, (USA), REPCEE (France) and 欧洲评论/Europeana (China). She is member of a number of international scientific boards, e.g. of the Institute of Central, Eastern and Balkan Europe of the University of Bologna, of the Reseau des Maisons des Sciences de l’homme in France (2008-2012). She has been awarded the Palmes Academiques of France and is president of Amopa-Bulgarie (Association of the members of the Palmes academiques). Anna Krasteva is member of the National Board of the Diplomatic Institute. Stefano Bianchini is Professor of Politics and History of Eastern Europe at the University of Bologna, Forlì Campus and coordinator of the Europe and the Balkans International Network. As an expert of Balkan issues and particularly on Yugoslavia and its successor states in politics (particularly nationalism, weak states and security, transition, EU enlargement), he has coordinated several international projects for the EU and the Italian governments, giving lectures in a number of prominent US (among others, Harvard and Yale) and European Universities. He is co-directing and regularly teaching in the European Regional Master on Democracy and Human Rights, in Sarajevo. Among his publications: From the Adriatic to the Caucasus: Viable Dynamics of Stabilization (Ravenna, 2003), Partitions: Reshaping States and Minds (London, 2005) and Regional Cooperation, Peace Enforcement, and the Role of the Treaties in the Balkans (Ravenna, 2007). A new book on the challenges of modernity in Eastern Europe in the 19th and the 20th centuries is forthcoming.
Schließen